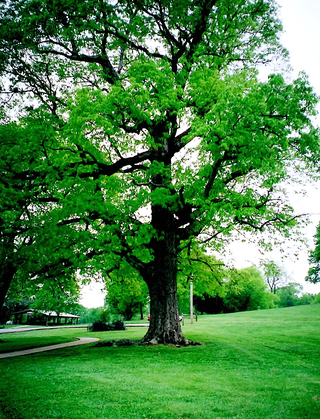 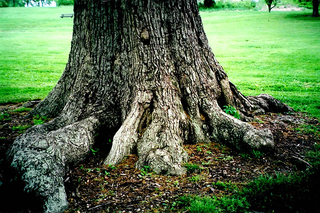 During one episode in Summer of the Skunks, Calvin and Jill Clark harbor a down-on-his-luck family friend, J. B. Walker.
Whenever Jill can get away unnoticed, she joins J.B. in the pasture at his ‘carving tree,’ hoping he’s in a storytelling mood. She is seldom disappointed.
Long after the novel was published and making its way in the world, I began to wonder if the tree I had created on paper (actually, at keyboard) might really exist. The only way to satisfy that curiosity was to, well, seek out such a tree.
I expected the quest to be long-lived. But during my next walk in a nearby park, a couple of the trees I often passed, if viewed through a forgiving lens, were facsimiles of the fictional one.
To settle for either, however, diminished the challenge.
Gas prices were falling, and our county was not yet totally entombed in pavement. I’d search high and low, near and far…
Around the next bend, there it stood — tall, full-leafed, roots sprawling above-ground — J.B.’s carving tree.
The emerging visual was even easier to see than the tree. There on the biggest root sat J.B.in scuffed up but clean brogan shoes, khakis, a gently fading blue shirt with sleeves rolled to his elbows, his carving knife making slow steady passes along the chunk of wood in his left hand.
Across from him on a smaller root, Jill leaned toward J. B.’s story. Her left hand idly patted Calvin’s old dog Bo, whose likeness was emerging beneath J.B.’s knife strokes.
Look carefully at the tree roots pictured above. Your mind's eye will likely picture J.B. and Jill, as mine did.
Be the first to comment
Loading…}